Department of German Language and Literature

When the Faculty of Philosophy was established in Sarajevo in 1950, it included the Foreign Languages Group that soon grew into the Chair of German Language and Literature and English Language and Literature. Today, these are two independent departments. The Department of German Language and Literature was established primarily to train teachers who would be employed in schools at all levels, and to provide education for civil servants. However, in the aftermath of the Second World War, the initial faculty in Bosnia and Herzegovina clearly understood that German Language and Literature in Sarajevo had to be organised both as a teacher training and as a scholarly unit that would be able to keep pace with the study of German language and literature in the so-called native countries, mainly Germany and Austria. As such, German Language and Literature in Sarajevo, from its very beginnings, adhered to the principles of an intercultural institution and the main goal of the Department was to offer a programme in German language, literature and culture. This was by no means a simple task, primarily because of the environment and its varied influences on programme design and instruction in all areas of foreign language and literature. In this context, we should emphasise the following: a foreign language environment that is completely different from German, the lack of highly-qualified teaching staff, varying levels of German language proficiency among matriculated students, and a lack of materials, textbooks and academic books for teaching. Also, we must keep in mind the political circumstances at the time, the post-war economic conditions in the newly-formed federal unit of Bosnia and Herzegovina, and the tradition of German language, literature and culture generally in Bosnia and Herzegovina, which had been strongly influenced by Austria-Hungary. All of these factors, each in its own way, influenced the development of the Department of German Language and Literature in Sarajevo, especially because the newly established University of Sarajevo did not have a tradition like that of European universities in Bologna, Paris, Prague, Heidelberg, Vienna, etc. The beginnings really did have to be very humble: there was a very small number of qualified staff and a small number of select students—in the first years after the Department was established, there were no more than fifteen students and later their ranks grew to 20 to 30 and finally 50 students per year.

At the beginning of the 1970s, a new generation of young scholars emerged. This group includes German language teaching assistants Erminka Selimhodžić-Zilić and Snježana Blažan-Žuljević, as well as German literature teaching assistants Rada Vranješ-Stanarević, Danka Nikolić and Ranko Sladojević, lectors Inka Omanović, Gordana Beljkašić and Bianka Vukorep, and Ana Božanović, a methodology instructor who was replaced by Ljiljana Masal after her retirement. The majority of the newly-arrived associates had completed their graduate studies outside of Sarajevo: E. Zilić, S. Žuljević and D. Nikolić in Belgrade, and R. Stanarević in Zagreb. Once a graduate programme was offered at the Faculty of Philosophy in Sarajevo, young scholars continued their education at their own faculty (E. Topalović as a teaching assistant for the history of German language and lectors S. Šimunac and I. Šećerbegović). R. Sladojević (German literature) and later E. Zilić and S. Žuljević (both in the area of contrastive linguistics) received their doctorates in Sarajevo. It is important to note that this Department, with a few exceptions, has selected faculty and teaching staff from the ranks of its alumni. The only assistant professor who came from outside the Department was Dr. Marija Bačvanski who came to Sarajevo after obtaining a doctorate in German language at the University of Novi Sad. We should also note that I. Pudić and S. Grubačić went on to teach at the Faculty of Philology at the University of Belgrade.

From the very beginning, the Department cooperated with German language and literature chairs at all the Yugoslav universities (mainly in Zagreb and Belgrade, and also in Novi Sad, Ljubljana, Zadar, Skoplje). The success of this cooperation is best exemplified by the fact that in the period from 1975 to 1986, several Department members participated in a joint project by German and Yugoslav linguists to write a contrastive grammar of German and Serbo-Croatian. Numerous master’s theses and doctoral dissertations resulted from this work, as did a two-volume publication—Kontrastive Grammatik Deutsch-Serbokroatisch (München / Novi Sad 1986, ed. U. Engel / P. Mrazović). The newly-established Department of German Language and Literature in Sarajevo received the support of foreign universities (Mannheim, Greifswald, Jena, Innsbruck, Salzburg, Vienna, etc.), as well as the support of the Institut für deutsche Sprache (Mannheim) and international foundations such as Deutscher Akademischer Austauschdienst (DAAD) and A.v. Humboldt-Stiftung (Bonn). Cooperation with universities in Mannheim and Würzburg, and intermittent cooperation with German language and literature programmes in Greifswald and Innsbruck, were also very fruitful.

The fact that from 1956 (when the first student graduated) until 2010, approximately 1000 students have graduated and gone on to teach German across Bosnia and Herzegovina and further abroad, as well as the fact that many alumni have worked and continue to work as translators and foreign correspondents in all areas of social and economic life testify to the constant work and development of the Department. A number of students have received awards from the University of Sarajevo for their achievements and bachelor’s theses.

During the war (1992-1995), the Department of German Language and Literature continued to operate, as did the Faculty of Philosophy. What had to be done was done with determination and pride, under degrading and inhumane circumstances. At the end of 1992, assistant professor Dr. Erminka Zilić became head of the Department and she retained this position until 1998. Of the previous faculty members, in addition to E. Zilić, only the methodology instructor Ljiljana Masal and Dr. Predrag Kostić remained. Despite hunger, shelling and illness, Ms. Masal would cross seemingly insurmountable distances at the time to arrive at the Faculty of Law in the centre of town where the Faculty of Philosophy was temporarily housed. During the war (1992-1995), Ms. Heda Šamanek returned to the Department and was of great assistance in organising the work of Department lectors. Soon after that, another lector, Ms. Nermana Mršo, was employed and this again revitalised the Department of German Language and Literature. As soon as the ceasefire was established in Sarajevo, Ms. Inka Omanović, who had worked as a lector before the war, returned and it can be said that the situation at the Department was improving daily. Real reconstruction, however, only took place after the actual end of the war when the Faculty of Philosophy relocated to its own building which, given that it was on the frontlines, had been significantly damaged. The Department of German Language and Literature was the first department of the Faculty to receive assistance for the reconstruction of both its facilities and its teaching process. Thanks to DAAD and the government of Germany, as well as the efforts of the first post-war DAAD lector, Ms. Katharine Ochse, two classrooms were reconstructed and equipped for the use of the Department of German Language and Literature, as was all the office space used by Department faculty and staff. A pre-war office was made available to students as a computer room. From today’s perspective, it seems that everyone was in a hurry to help the Department and therefore also the Faculty. At that time, cooperation with Österreich Kooperation from Vienna was established and in 1996 the Department received its first Austrian lector, Ms. Therese Kaufmann. Since then, Austrian lectors have been an essential part of the teaching staff at the Department of German Language and Literature. Visiting scholars from Germany, financed by DAAD, as well as scholars from France and Italy who came as part of TEMPUS projects assisted in carrying out instruction. We also cannot forget the assistance of SOROS and WUS, which made possible the presence of visiting scholars. In this context, we should certainly mention Dr. Anton Janko from the University of Ljubljana, who immediately expressed a readiness to help at a time when most of our colleagues still did not dare visit Sarajevo, as well as Dr. Siegfried Gehrmann who came from Zagreb. In 1998, Dr. Mira Đorđević and Dr. Miloje Đorđević returned to the Department, which significantly improved staffing conditions and ended the need for the presence of a significant number of visiting scholars. In 1999, Ms. Zlata Maglajlija, a leading professional, joined the Department as a German language teaching methodology instructor. The number of young people wanting to study German language and literature increased after 1996 with the return of significant numbers of people who had been forced to flee Bosnia and Herzegovina. New teaching assistants have been employed since 1999. Vahidin Preljević is at the top of this list as he was employed as the first post-war teaching assistant for German literature. After him came the new teaching assistants Nedad Memić, Vedad Smailagić, Selma Grebović, Ljubinka Petrović-Ziemer, and lector Minka Džanko.

In 2006, the Department again lost staff when Dr. Miloje Đorđević and Dr. Mira Đorđević retired and some younger colleagues (Ljubinka Petrović-Ziemer, Nedad Memić, Selma Grebović) decided to continue their careers abroad. Again, as in the period 1992-1998, for three years the Department continued to function with a single faculty member—Dr. Erminka Zilić. In the following period, new teaching assistants were employed: Dario Marić (2006), Naser Šečerović (2007), Alma Čović-Filipović, Sanela Mešić and Ivana Nevesinjac (2008), Nina Osmanović (2010), Asja Osmančević (2012), and lector Lara Hedžić (2011). The staffing situation improved when Vahidin Preljević (2009), Vedad Smailagić (2010), Sanela Mešić (2013), Dario Marić (2014) and Ljubinka Petrović-Ziemer (who returned from abroad in 2014 and resumed her work at the Faculty of Philosophy in Sarajevo) were promoted to assistant professors and a number of younger teaching assistants defended their master’s thesis and submitted a prospectus for their doctoral dissertation. In the period from 2012 to 2018, Nina Osmanović, Asja Osmančević, Ljubinka Petrović-Ziemer and Ivana Nevesinjac left the Chair of German Literature, while Mersiha Škrgić came to this Chair in 2016 from the Faculty of Philosophy at the University of Zenica.

It should also be noted that DAAD, often in cooperation with other German institutions, funded visits by respected professors from Germany who helped the Department overcome its frequent staffing crises since 1992. Here we should note, among others, the frequent visits by Dr. Norbert Richard Wolf, Dr. Ulrich Engel, Dr. Beate Henn-Memmesheimer, as well as the Johann Gottfried Herder initiative which made it possible for Dr. Klaus Kreimeier, Dr. Eckhard Bernstein (2006/07) and Dr. Bernhard Zimmermann (2007-2009) to spend a full two semesters or more at the Department. We should also note our renewed cooperation with the Department of German Language and Literature at the Faculty of Philosophy in Zagreb which has resulted in visits by Dr. Marijan Bobinac, Dr. Zrinjka Glovacki-Bernardi and Dr. Slađan Turković. In the period from 1996 to 2017, Katharina Ochse, Regina Ryssel, Bernhard Kliegl, Katja Hunning, Christian Koller, Heike Link and Tanja Sanden worked as DAAD lectors at the Department, while Therese Kaufmann, Christa Maresch, Margot Feldhofer, Christa Schwab, Ulrike Kapp, Stephanie Weismann, Barbara Derler, Judith Strobich and Florian Haderer have worked as lectors from the Austrian Cooperation and Austrian Academic Exchange Service (ÖK/ÖAD).

In the past fifteen years or so, there have been renewed efforts in scholarship that have taken place in parallel with the introduction of a new curriculum that follows the Bologna principles (NPP 2005/06, NPP 2008). In 2017, a large international conference of German scholars was organised in Sarajevo and was attended by 100 participants. In 2018, a large national conference was organised and an increasing number of Department members are contributing to contemporary academic trends. 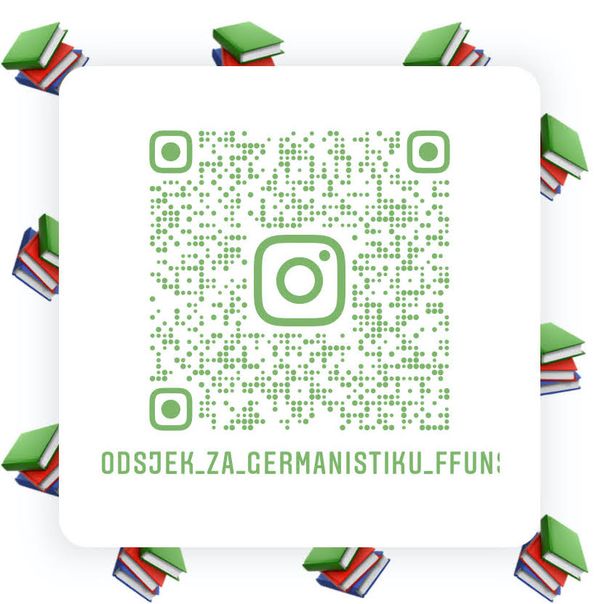